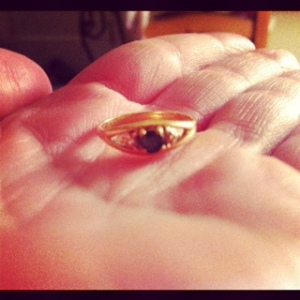 I seem to have lost my sense of time in the past few weeks. I don’t know where it has gone. It’s kind of like I am in a hamster wheel. Perhaps it’s not the worst place to be, but this annoys me. To my credit, this fall has been intense. For starters, once again, the San Francisco Giants, the baseball team I grew up with, moves on to the World Series tomorrow night. I have been watching a lot of baseball, which is usually the case in the post-season, regardless of who’s still in. Well, with the exception of the Dodgers and the Yankees.

Since I was a teenager, I have had a reoccurring dream where I am searching everywhere for something I have lost. Sometimes it happens when I really have misplaced something I care about, other times when I am overly tired. I tend to lose everyday things for a few hours–a day or two tops–but for the most part, I am able to have reconnaissance missions to locate them. Except twice.

In high school, I lost a gold and sapphire birthstone ring I received in 3rd grade. It was for my birthday, and I had scoured the Best Catalogue over and over. With enough nagging and proving to my mom that I wouldn’t ever lose it, there it was on the fireplace hearth, ready for me to open after dinner and cake. I bent the hell out of the ring over the years, and had it straightened with my dad’s pliers, broke the shank in half, and even had to have it resized. This ring survived endless abuse, but it was loved. Until I lost it, and then it was adored and revered.

I was in high school, maybe college, and the ring went missing at some point. I didn’t wear it daily; it had a permanent resting place in my jewelry box. But then it didn’t. I stewed, and searched, and got teary. I mentioned it to my mom, who was as baffled as I was. It came up in conversation that Sunday when my Gram came to dinner. The next day, she called our house and asked to talk to me. She told me that she had a dream the night before about my ring, and I should check behind my nightstand, under my bed, anywhere near where I could have taken it off in my sleep. Low and behold, I found it underneath my nightstand. It was the last piece of jewelry I lost. Until 2007.

When I graduated from 8th grade, I received a 14 karat gold charm bracelet from my Gram, with a charm on it. It was a gold filigree cross. That same day, I received a shamrock from my parents, a “13” from the family I babysat, and I was slowly on my END_OF_DOCUMENT_TOKEN_TO_BE_REPLACED